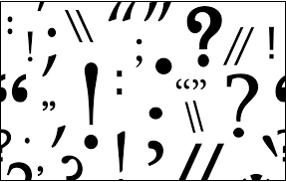 I personally have a strict quota on the maligned mark: one per week. Or, it’s possible I’m just a mean person. It turns out that women in business need exclamation points to feel appreciated. Wall Street Journal editor Nikki Waller calls exclamation points “the emotional fabric softener of workplace interactions.”

She decided to spend a month communicating with zero exclamation points and wrote about the results. It wasn’t easy to kick the habit; she writes that women bosses find “routine emails can become complex calculations about warmth, likability and authority. Better to conclude an email with “Thanks!”? Or will “Thanks.” suffice? No human is that excited in real life, but it can be easier to write ‘Looking forward to getting that spreadsheet!’ rather than risk sounding cold or unfriendly.”

Waller had to work hard to fill the emotional gaps left by the lack of exclamation points. (She even resorted to a saccharine (she describes it as “heartbreaking”) “Grazie x1000.” She writes about the challenges other women have had with under-punctuated emails. One reported that she’d written an email to a female staff member that included “Good job.” With only a period at the end. The woman’s instant reply was: Are you mad at me?

If you’re a man reading this, you’re probably thinking I’m crazy. Men simply don’t worry about punctuation; they have no idea it’s full of emotional landmines.  A 2006 academic study of exclamation points (really!) found that women use them much more than men (no kidding!) and that they were generally considered as “’markers of excitability,’ a phrase that implies instability and emotional randomness.” Ugh.

The study also points out that “the [use of exclamation points] might convey the writer’s lack of stature; that, in fact a confident person could “affirm their views by simply asserting them.”” Double ugh.

The academic study actually categorizes the various meanings “markers of excitability” can indicate. They include taking action (Working on it now!) implied or direct apology (Wish I hadn’t done that!) camaraderie or support (Jane’s right!) issuing a challenge (Prove it!) or to indicate anger (I knew she wouldn’t finish on time!)

Nikki Waller writes that it was a relief to be able to use exclamation marks again. She says women actually have an advantage in being able to communicate  – and interpret –  such a variety of emotions with a single keystroke. Tone matters, she says, and “leaders can deflate or empower someone in a sentence or two.” So if you’re hoping to be perceived as a warmer or more empathetic leader, try using more exclamation marks. It works!