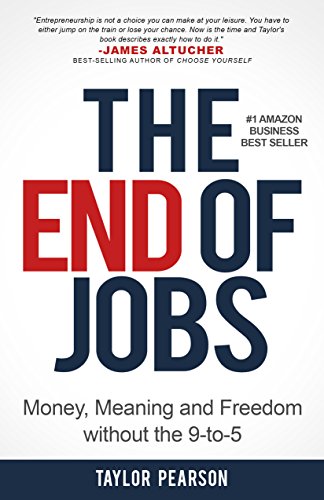 Taylor Pearson is the author of The End of Jobs: Money, Meaning and Freedom Without the 9-to-5. I am aware that this is a blog about finding and keeping your next great job, but this book has made me re-think the whole concept of employment. It will change your world view, too.

Pearson says that instead of a global recession, we actually experienced a transition from one economic period to another. He lays out a compelling case. HE writes, “Data from the US Census Bureau, from 1948– 2000, jobs grew 1.7 × faster than population. Since 2000, the population has grown 2.4 × faster than jobs.”

Manufacturing jobs are disappearing at a rapid rate, moving to low-cost human capital parts of the world like Asia, and then, eventually, being replaced by technology. White collar jobs are disappearing rapidly as well, sometimes moving overseas (call centers and software development moving to India), but just as often, being replaced by technology with no middle step. Kiosks replacing airline agents and software replacing travel agents, for example.

Software Is Eating the World.

Generations of people all over the world were raised to believe that going to college and getting a good job was the road to success, prosperity and security. We were also raised to believe that starting a business was risky; most small businesses failed, and the startup costs were prohibitive. Pearson says that while we weren’t looking, the world changed.

Today, having a job (no matter how good, is the risky proposition. Becoming an entrepreneur is the only way to have any control over your own future, prosperity, and success.

“Those that don’t adapt are becoming trapped in the downward spiral of a dying middle class – working harder and earning less,” he writes. He starts the book by looking at three friends of his from college.

Back in Columbus, Max had graduated with me and was working at one of the bigger accounting firms in town. He was anxious in the wake of his two-year performance review. He’d placed third out of five in his department despite working fifty- and sixty-hour weeks in the months leading up to tax time in April. He felt grateful for the 3% cost of living raise he’d gotten each year. His girlfriend’s parents were proud. He was “putting in his time.”

Julian had gotten into one of the nation’s top law schools. He’d done well and, as a result, had already gotten a position with a top San Francisco law firm. Like most people starting a career in law, he was planning to spend the next three to five years working long hours, sometimes eighty- to one-hundred-hour weeks at the firm, to build a reputation and pay off his student loans. He eventually wanted to start a family and hoped to move to a smaller, more affordable city where he could take a position with better work-life balance.

Marie had gotten into medical school straight out of college and was in the process of choosing her specialty. She’d always wanted to be a family practitioner, but Medicare and insurance reimbursements for primary care doctors like family medicine and internists had dropped so low, she feared there was no way she could pay back the loans and make a decent living. Instead, she’d opted for Anesthesiology, fingers-crossed that reimbursements wouldn’t continue to fall for specialist physicians.

If these smart, driven, hard-working and well-educated people are struggling, something has changed. We’ll explore what has changed and what you can do about it in future posts.

2 thoughts on “The End of Jobs”