This is one of a series of posts on The End of Jobs: Money, Meaning and Freedom Without the 9-to-5.

In The End of Jobs, Taylor Pearson says that even highly trained and credentialed workers are finding that it’s harder and harder to find quality jobs after graduation. “The glut of lawyers in the U.S. may be the most obvious example, but even in the traditional STEM fields (science, technology, engineering, and mathematics), which were long considered lock-ins for employment, people with related degrees are struggling harder to find jobs than they were a decade ago.”

One reason for the dearth of opportunities, he argues, is that we’re training workers to do the wrong things and to do things the wrong way. He presents a framework for thinking about complexity in work called The Cynefin framework (pronounced Kih-neh-vihn), which was developed by Dave Snowden after studying the management structure at IBM. 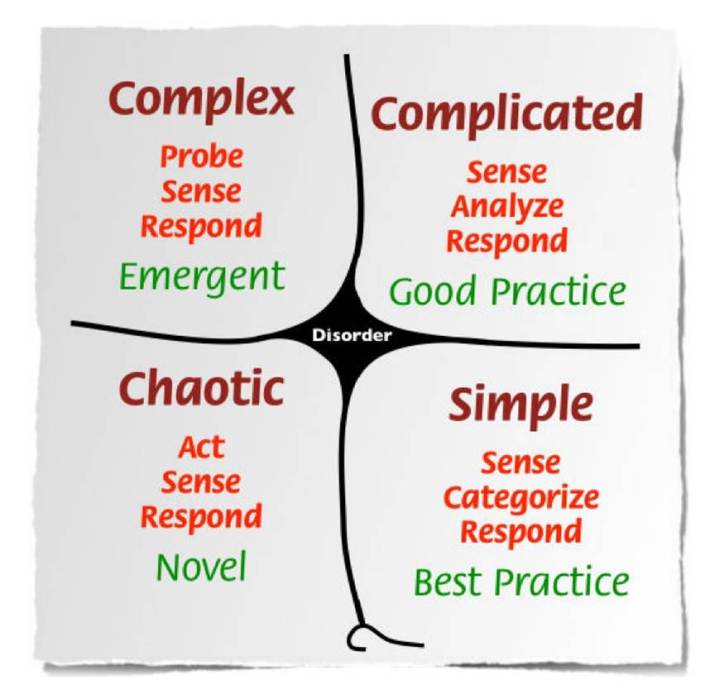 Pearson says that historically, almost all work has fallen on a straight line continuum form simple to complex, and we’ve trained workers to function in those domains. “But in recent years that’s no longer the case,” he writes. “What this categorization ignores are the complex and chaotic domains.”

Here’s how Pearson defines the four types of work:

When the Industrial Revolution occurred in the 19th century, factories need workers who had the skills to perform simple work well. Pearson writes, “Horace Mann, often credited as the father of the modern education system, started a school 150 years ago, called the Common School. The purpose of the Common School was to teach students how to follow directions effectively so they would be prepared for factory work.”

That’s why we’re trained to follow instructions, wait for direction, look for a single right answer, pick from several pre-written answers, trust expert opinions, learn and base your actions on history, and even watch the clock and respond to the bells signaling lunch and quitting time. We’re trained to be effective factory workers even today, when factory jobs are disappearing rapidly.

The skills we’ve acquired through education and credentialing are not the skills we need to continually adapt to changing conditions, respond to rapid innovation and continuous feedback from the market, or build a better app.

Steve Jobs’ mantra at Apple was “Think different.” Most of us graduate from school afraid to think different. In fact, different is scary and threatening, and it gets scarier as we age into our careers. In future posts, you’ll learn how to cope better with chaos.

1 thought on “Work is Hard, and Working Harder is Not the Answer”