Sheryl Sandberg, COO of Facebook, has been making headlines with her book, Lean In: Women, Work, and the Will to Lead. Sandberg’s message is that women too many women are being overlooked for promotions due to lack of confidence and poor negotiation skills, not lack of opportunity. 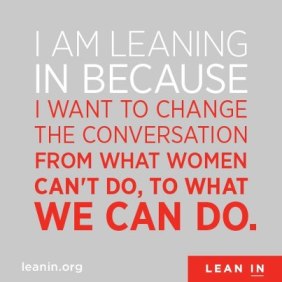 The ideal worker profile, especially for executives, was created when men dominated the workforce and most had wives at home to take care of children and housework. By the time women came into the workforce, 40 hour weeks were the minimum expected, and in a competitive business environment, many workers are expected to put in 50 – 60 hours every week.  Many women feel that asking for time off to take care of family issues or spend time with their children risk being marginalized and overlooked when it comes time for promotions and plum assignments. They also report feeling that their skill sets are less valued in the workplace.

In a report acerbically titled: Catalyst, The Double-Bind Dilemma for Women in Leadership: Damned if You Do, Doomed if You Don’t (2007), researchers found that “ideal candidate” qualities were defined in results-oriented terms:

“Consistent with previous Catalyst research on gender stereotypes of women leaders, the ideal employee was mostly described in agentic terms. Forty-two percent of respondents described the ideal worker as assertive, independent, results-oriented, and a good problem-solver. Only 22 percent of interviewees cited communal characteristics, such as friendly, likable, or people-oriented, as those that might be helpful to advance.”

Sandberg writes about feeling like an imposter and observes that many women who are offered opportunities will say things like, “Are you sure I’m ready?” This, she says, signals that you aren’t confident that you can succeed.  And not every woman will have a boss who will build her confidence.  He might simply take your word for it – that you’re not ready.

Even female bosses may buy into gender-based stereotypes.  The same Catalyst report cited a senior female executive as saying: “I still [tell] young women or people [who] ask me to be careful with their emotions and make sure they don’t express them too much in front of men.”

What kinds of qualities do help advance your career? According to a 2008 Catalyst report by Laura Sabatini called Unwritten Rules: What You Don’t Know Can Hurt Your Career, there are several things you can do to get noticed and be considered for promotions. The report says that it uses the term we use the term “unwritten rules” to “describe generally unspoken workplace norms and behaviors that are necessary to succeed within an organization but that are not communicated as consistently or explicitly as formalized work competencies are.”

And if you’re wondering where “Perform well, produce results” wound up in the study?  Only 35% of the executives cited performance as what puts you on the A list. Thirty-five percent of respondents said that they wished they had known that “just” working hard is not enough to succeed.

Sandberg has started a site to continue the discussion about women and success.  You can find it at http://www.leanin.org.

1 thought on “The Unwritten Rules of Advancement”