Telecommuting is fast becoming part of the mainstream workforce.  If you’re considering a career change that allows telecommuting or planning to implement a remote workflow into your current job, these tech tools will help make cutting the office cord work for you, and – more importantly – for your employer.

A Tablet Turns the World Into Your Office

Thanks to technology, the choice is no longer between a germ-ridden communal office and the isolation of a home office. With a tablet, today’s telecommuter can work from anywhere there’s a really good WiFi or LTE signal. Hooked up to the office via a remote access program such as GoToMyPC or LogMeIn, a tablet can free you from a desk 90 percent of the time. Depending on your office eco-system, the choice is likely between Apple’s iPad, which works far better as a productivity device than it was ever intended to do, and Microsoft’s Surface 2, which, when equipped with LTE in early 2014, looks set to become the darling of telecommuters everywhere.

Cut the Cord With the Cloud 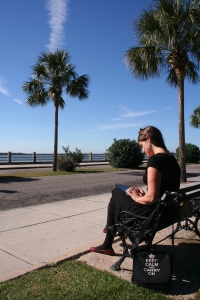 Cloud computing has taken office cord-cutting mainstream. By moving your entire workflow out of your devices and into the ether, you can access your files anytime, anywhere. Your choice of online storage service is the key to a seamless cloud experience. Dropbox is the most popular and offers the simplest interface. But if you deal with highly sensitive information a robust encrypted service is best. The blog Lifehacker recently rounded up some of the most secure cloud storage solutions.

Working remotely calls for Type AAA organization. When you don’t sit in the front of the same stationary device all day, a rainbow of Post-It notes on the screen no longer cuts it. There are a myriad of To Do list-type applications available, but the shining star is undoubtedly Evernote. Incorporating notes, schedules, reminders and even word processing in one elegant package, Evernote is the ultimate cloud-based organizational tool. Evernote’s biggest selling point is its cross-platform functionality. Your lists will sync seamlessly across your devices, even if your smartphone is Android, your laptop a Mac and your desktop a Windows PC.

Instant Messaging: Not Just for Teens

Keep up with the water-cooler banter and don’t be the last to know about the position that just opened up, or the big deal that fell through. Tap into the grapevine with instant messaging services such as Yahoo, Facebook and iMessage, and always be “available” for your co-workers. Also, take advantage of products such as Skype and Google Hangouts to join meetings and conference calls in “person,” not just as a disembodied voice at the end of a phone line.

Ultimately the success of telecommuting lies in your hands. If you are self-motivated and committed to the process, it can be a liberating and life-enhancing experience. But if you see it as an ideal way to slack off, you will likely not only fail, but get fired too.

Guest post by: Jennifer Tuohy is a technology writer for ebay, as well as an editor and social media consultant.